A couple months ago on a murky Seattle day, my colleague Andrew and I were at the HaptX office discussing the upcoming release of Ready Player One. The new trailer had dropped, and it showed a set of haptic VR gloves worn by protagonist Wade Watts.

Having read the book, I wasn’t surprised to see haptic gloves featured in the movie; I was surprised to see them shown prominently in the trailer. That was the topic of our conversation: How much would Ready Player One highlight or explain haptic technology?

Ready Player One is likely to represent a seminal moment in bringing virtual reality to the mainstream and introducing viewers to next-generation VR devices like haptic gloves and omnidirectional treadmills.

The haptic gloves in the latest trailer show how the user can use his hands to interact naturally in VR. These are so integral to the world of RPO that every time we see a character wear a head-mounted display (HMD), he or she also wears a pair of VR gloves. What the trailer doesn’t communicate is the realism of the touch sensation these gloves deliver. Is this merely a rumble, or do virtual interactions feel like the real thing?

A haptic suit shows how haptic effects can be rendered on the body.

At the root of my conversation with Andrew: Would the movie go so far as to use the word “haptics” or would it merely gloss over the tech, leaving most viewers to assume the gloves are pure science fiction.

A search on Google Trends reveals more searches for “VR gloves” than “haptic gloves.” Could this release be the moment I no longer have to explain haptics to my friends and family? Instead, I can point toward the movie and say, “Remember those VR gloves in Ready Player One—those are haptic gloves, and that’s what HaptX is building.”

I remember a similar moment working on Dungeons & Dragons in the mid-2000s. The Lord of the Rings trilogy had concluded, and finally, I could easily explain D&D to the ungeekly.

“It’s a bit like sitting around a table and pretending to be a character in Lord of the Rings—except you roll dice to see if you beat the Balrog.”

“Ohhh, I see,” they’d respond with a tone of vague understanding and mild concern for my mental stability.

Dungeons & Dragons was a well-established brand, and the success or failure of Lord of the Rings was unlikely to make or break the business. I’m less certain of the relationship between Ready Player One and the fate of consumer VR. If it’s a success, it could spawn renewed interest in the industry. Top Gun led to a spike in Air Force Recruitment. Finding Nemo led to a mass purchase of pet clownfish. The Social Network preceded a new wave of startups. Perhaps a successful Ready Player One can inspire a younger generation to put down their smartphones and strap on headsets. Perhaps the movie could be VR’s Clownfish boom.

Warner Bros and a Wise Buy

With Oculus Go arriving in early 2018 and HTC Vive an official partner of RPO, headset-makers see a huge upside, regardless of whether the movie is commercially successful. Millions of advertising dollars are pouring into making VR look cool.

The relationship goes both ways. Warner Bros. bought the script to Ready Player One back in 2010, two years before the Oculus Rift Kickstarter. Since then, the movie’s release has benefited from a swell of interest in VR resulting from the launch of Vive, Oculus, PSVR, and GearVR.

Books like Snowcrash, Neuromancer, and Rainbow’s End are perhaps more revered among the sci-fi literati, but Ernest Cline’s Ready Player One novel achieved a level of acknowledgment that older, less accessible VR books never did. When asked about his attachment to the project, Director Steven Spielberg said, “I suddenly saw a future that Ernest Cline—the writer of the book—envisioned. It wasn’t that far away from what I think is going to happen someday.”

And if Ready Player One the movie is indeed the success many in the VR industry are hoping, it could signal a sea change not only in the public’s view of VR but also in science-fiction movies. Every one of last year’s top ten grossing movies was either a sequel or a reboot. Ready Player One at least represents an adaptation, and if lucrative for the studio, it might increase demand for adaptations of similar science fiction.

“This is one of the few times that there’s a sci-fi movie and the technology is actually here. You don’t let those moments get by you. You have to make the most of them.” -Shari Frilot, Sundance

The technologies of Ready Player One are closer than many realize. A recent surge of interest in VR Chat has drawn comparisons to Ready Player One’s Oasis. Linden Labs’s Project Sansar, Against Gravity’s Rec Room, and Microsoft’s Altspace have attracted similar speculation. Most of these nascent social experiences show the seed of potential for a more connected VR “Metaverse.” What they need to be successful are more people—for example, tens of millions of RPO movie-goers.

The hardware has made huge strides in just a few years, making Cline’s 2045 prediction now seem conservative. In haptics, HaptX has developed a set of haptic gloves capable of delivering powerful force feedback and realistic tactile feedback. They’re the closest to providing the kind of high fidelity touch that’s portrayed in the movie.

Locomotion in VR is also progressing. Look closely and you’ll see that the omnidirectional treadmill in the movie is an adaptation of a present-day company’s product. 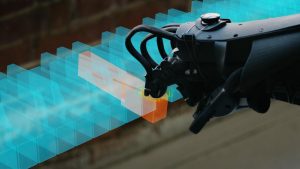 The HaptX Glove prototype provides the kind of high fidelity touch of the VR gloves portrayed in Ready Player One.

Head-mounted displays are increasing resolution. The Vive Pro improved resolution from its predecessor by 78 percent and HMDs like Starbreeze are adding a wider field-of-view to provide more immersive visual experiences.

When HaptX attended Sundance this year, I asked Shari Frilot, a chief curator at the film festival, why she chose HaptX, which was the first major VR hardware to debut at the festival since the Oculus Rift prototype in 2012.

“This is one of the few times that there’s a sci-fi movie and the technology is actually here,” she said. “You don’t let those moments get by you. You have to make the most of them.”

Regardless of the movie’s critical reception, the kernel of technology in Ready Player One is here today. At HaptX, we’re just excited to have a cultural touchstone to talk about haptic technology.