Team Rift vs. Team Vive: How about Team VR?

Technology blogs are buzzing about the first major showdown of the VR industry: the Oculus Rift vs the HTC Vive. Which has better content? Which has better specs? Which one will actually ship?

While there’s fun in the debate, it’s too early to pick sides. This industry is so young that there is more to be gained by growing the industry as a whole than fighting each other for a slice of the pie.

I’m not alone in this feeling. I’ve spent the last few weeks sharing HaptX’s latest demo with leaders, developers, and fans in our industry. Just about everyone we have spoken to has been incredibly gracious, offering support, connections, and advice. It is this kind of welcoming attitude that makes me proud to be part of the VR industry.

“A rising tide lifts all boats.”

The argument for collaboration in VR goes beyond pure altruism, however. Ultimately, it comes down to a question of economics. Earlier this year, Goldman Sachs published Virtual & Augmented Reality: Understanding the Race for the Next Computing Platform. 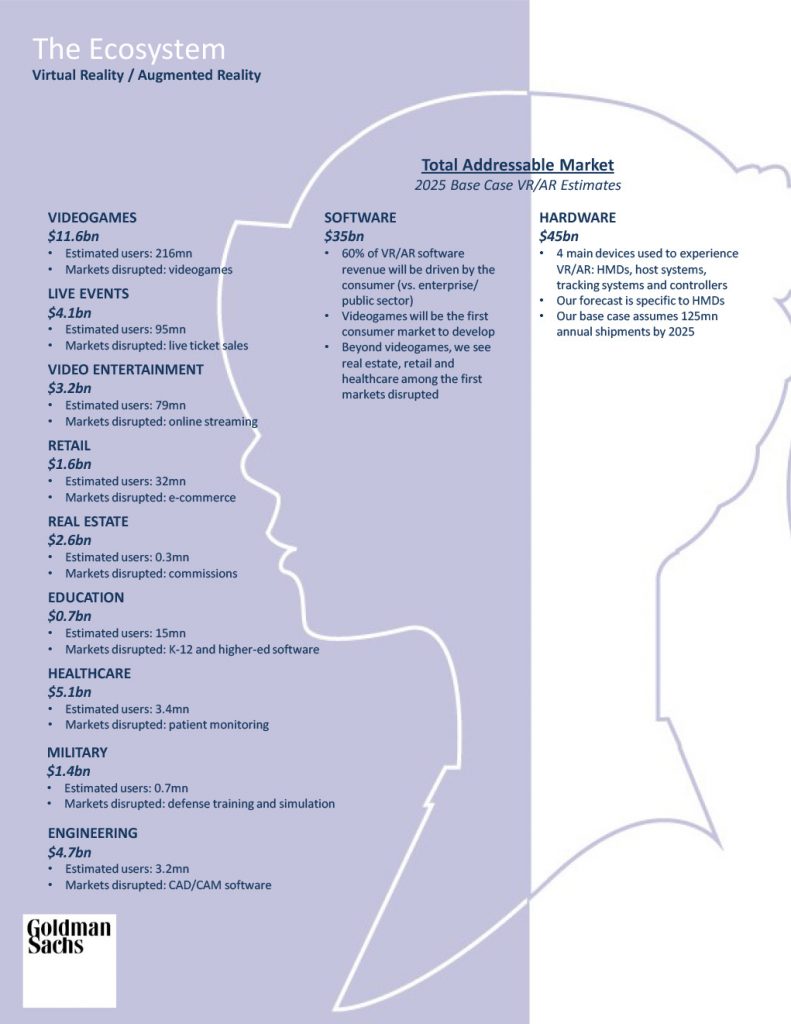 An excerpt from Goldman Sachs report, forecasting its base scenario for the VR/AR market in 2025. You can read an excerpt of the report here.

This report addresses the current state of the market, and forecasts growth in the VR and AR markets through 2025.

“As the technology advances, price points decline, and an entire new marketplace of applications (business and consumer) hit the market, we believe VR/AR has the potential to spawn a multibillion-dollar industry, and possibly be as game changing as the advent of the PC.”

Goldman forecasts yearly sales of up to $182bn for VR and AR hardware and software by 2025, but hedges its bets by accounting for a “delayed uptake scenario,” in which VR struggles to expand beyond the video game market. In this delayed uptake scenario, VR/AR achieves a total market size of just $23bn over the same period.

In a nascent industry like VR, no company stands to achieve 800% growth by displacing a direct competitor. On the other hand, accelerated market development over the next 10 years stands to produce these enormous gains for the average company.

Obviously, some level of competition is inherent to (and desirable in) any free market; however, in such a high-growth environment, we should all be asking first:

“What can I do to accelerate the adoption of VR?”

The question, “How can I beat the competition?” comes in a distant second.

Seldom does selflessness align so clearly with economic incentives. In any scenario, this probably won’t be the case in 2025, so let’s enjoy this a bit longer before pledging allegiance to team Oculus or team Vive.