An Interview with IDTechEx’s James Hayward

Market analysts spend their time sifting through data, interviewing researchers and company leaders, and learning everything they can about the macroeconomic trends driving an technology or industry. They consult companies large and small to help them make informed recommendations about risk and opportunity. And typically, they’re the ones asking the questions.

At HaptX, we’re working on haptics, an industry that almost every analyst has projected to have a double digit CAGR for the next five years. For that reason, we recently sought out James Hayward, an analyst with IDTechEx who focuses on wearables, sensors, and haptics to get his take on the broader industry trends and learn a little more about his approach to researching companies and new technologies.

HaptX (Bilsland): Thanks for taking the time to chat with us. I suppose this is a bit of a reversal in roles for you?

Hayward: Yes, we’re normally at the other end of the questions, but it’s good to step back and reflect on what excites us about the technology.

HaptX (Bilsland): I saw your background was in chemistry. Can you tell me a little more about your role and how you went from studying chemistry to working as an analyst on wearable and haptic technology?

Hayward: I studied at Imperial College in London where I received an integrated Master’s in Chemistry and Medicinal Chemistry. I’m a naturally curious person, so I jumped at the opportunity to work at IDTechEx where the role was to learn about emerging technologies and take a critical view of how they’ll impact the market.

When I joined IDTechEx in 2014, it was around the rise of the wearables hype, and the company was looking at how to approach wearables. I was fortunate to be embedded from the beginning of it. I looked at electronic textiles and sensors, as well as haptics, of course, because it was an important feature for wearable devices. A lot of innovation was also happening throughout the value chain, from materials and components to devices.

HaptX (Bilsland): Given the timing of your entry into the field, do you think wearables have lived up to the hype?

Hayward: The success of wearables is partly a question of social mechanisms. The hype was generated around some key events and VC funding. Wearables became a term that was adopted widely, so a business could go to a manufacturer or company across the world to see how they were addressing the “wearables market.” The industry for wearable electronic products existed well before that—the term just became popularized at that time. Prior to the wearables hype, we saw general trends of technology becoming more personable and comfortable, being integrated into our surroundings and our clothing—all of which was captured by the concept of “wearables.” 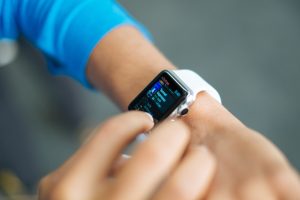 A lot of my work is establishing timelines to try to understand where these technologies are emerging and why, even before a more popularized term such as “wearables” exists. These technologies can take a lot of time to develop. Unless you know where the technology came from, it’s hard to predict where it’s going.

HaptX (Bilsland): And when you’re doing this kind of research at IDTechEx, do you work independently or collaborate with other analysts to evaluate emerging technologies?

Hayward: All the analysts work independently. We work as technology scouts and consultants with our team here in the UK as well as other colleagues around the world. The headquarters is in Cambridge, UK, where we have two offices, but we also have offices in Florida, Boston, and with analysts out in the San Francisco area. We also have an assortment of offices and staff around Asia — the goal is to operate on a global scale.

HaptX (Bilsland): When you set out to learn about a company or emerging technology, what are some of the first steps you take to gain familiarity?

Hayward: It’s different between how we review a company versus a technology, so let’s start with company. There are lots of very powerful tools available on the web. Each of them has its limitations, but even tools like LinkedIn are useful. You can’t get too much from a company’s background and description, but you can look at the growth markets they describe, how it’s hiring, and what new markets it’s pursuing.  Looking at the people within a company can be very powerful; they may be a team that has spun out of academia or another larger company. They may have extensive history working with the technology they are commercializing or they may be entrepreneurial opportunists from other areas.

We have a lot of our own analytics tools as well. The company has been around for about 20 years, and we’ve developed a robust set of contacts and an internal knowledge base. The key part of our process is to embed ourselves within the industry, via events, visits or otherwise, and conduct primary interviews where we can ask challenging questions about business models and technology development. By investing in this time in thorough research, we can build a sense if timelines, expectations, opportunities, and how a company will grow based on its size and the technology it’s pursuing.

HaptX (Bilsland): What about when a new technology is coming onto the scene? How do you go about learning about it?

Hayward: Every one of our analysts has a strong technical background in specific subjects. Mine was in chemistry, but I embraced the opportunity to learn much more about the practical elements of electronics. Across the whole team, there’s always a reference point internally for an emerging technology.

We spend a lot of time talking to people. At first, we’re mostly listening to how someone talks about a new technology, but you increasingly learn the right questions to ask to understand what they’ve achieved beyond the top-level pitch.

We always try to be critical of ourselves and hold each other accountable for the research by testing conclusions on how a technology is evolving. It’s one of the best things about being able to work within a flexible, experienced and proactive team, and our customers often compliment us on not being afraid to tell it as we see it, even where that may involve a negative outlook.

HaptX (Bilsland): Shifting gears a bit: You recently wrote about the Immersion lawsuit with Apple and Fitbit on LinkedIn, where you provided some estimates on what a loss could mean for those companies’ revenue. As haptic technology in wearables becomes more ubiquitous, do you expect to see a rise in these kinds of lawsuits? How do you see companies in this space avoiding such legal entanglements, if at all?

Hayward: It depends on the companies and individuals in each space. Different companies and industries are characterized by differing degrees of litigiousness. In some spaces, we don’t see the same type of rigor in enforcing patents, usually out of a desire to see an industry grow.

When we hear about a lawsuit, it’s typically at the end of a legal process, often the result of failed negotiation or a point at which one company can no longer ignore another. We can only infer so much as outsiders. In a lot of these situations, companies are careful about what they tell analysts.

Haptics has been particularly litigious, and I recommend that anyone in the industry look at the article to see how my thinking evolved. There’s a question around the whole business of patents and how to make it viable without stifling innovation and growth.

Some industries are defined by patents, such as 3D printing. With 3D printing, you saw the expiration of a few key patents, and then suddenly it became an industry in which consumer/desktop 3D printers could move forward.

HaptX (Bilsland): You’ve been at IDTechEx for about three years. In that time, have you seen any industry trends in haptics, wearables, and human-machine interfaces that have surprised you?

Hayward: Probably timelines and the wider context of what makes things move. When I started developing a knowledge of haptics, I saw a lot of negative reports that claimed ERMs were too good and too cheap to allow any change in the space. Lots of companies believed there wasn’t much opportunity.

This was a narrative before Apple’s Taptic launched, and what we then saw was a big player take an industry by the scruff of the neck and move it forward in a way that put that player in a strong position. It was in defiance of competitive patterns, and it was interesting to see what it takes to really push forward innovation. That left open the door for smaller players to get into the field.

When you follow technology every day, you don’t see it move as fast as external perceptions. When we do our analysis, much of our work is to understand when maturity will exist within a given technology. We consider what factors will bring it to maturity, such as a patent expiration, a big investment, a legal or regulatory reform, or a major player forcing the industry forward.

HaptX (Bilsland): And so looking ahead, what emerging technology excites you most in the next five years?

Hayward: One is electronic textiles. For years, we’ve seen an effort to bring electronics into clothing. The maturity is dependent on a few factors, including R&D investment and development of an appropriate manufacturing ecosystem. It would need to have an interface, such as wearable haptics, as well as a solid value chain and set of use cases.

HaptX (Bilsland): And finally, do you have any recommendation for startups and other early-stage companies to get on your (and IDTechEx’s) radar?

Hayward: The main benefit of a company like IDTechEx is that we have a customer base who trusts us. While we’re going about our research, we’re writing company profiles that go out to our subscribers. Each week, we profile about five companies where we can capture all the information in a critical, yet qualified and fair way. This gives us a huge network of companies and an understanding of commercial ecosystems that they exist within.

We also run a series of events around the technologies we’re covering. The idea is to enable an innovative ecosystem so all the right people are in one room at one time. We want to create a catalytic environment that allows growth and opportunity for the companies involved. We run one in Santa Clara in November and one in Berlin in May.

Many startups exhibit with us. We have a launchpad for early-stage compan

ies to demonstrate their products for the first time publicly and get attention from our attendees and customers. A lot of analysts organize events, but we’re one of the only firms to organize events of this scale and with this kind of value.

HaptX (Bilsland): Thanks for taking the time and sharing your insights!

Come visit us at the IDTechEX Show in Santa Clara