Kate Edwards shares a quality with many people in the game industry: She didn’t set out to work in games. Edwards served as the Executive Director of the International Game Developers Association for five years, during which she fought to increase awareness about inclusivity and work-life balance for an industry that continues to rapidly evolve. Reflecting on her career and her time at the IGDA, she says that like many, she ended up in games after finishing a so-called “normal career.”

“Some people kind of see the industry as the island of misfit toys,” she says. “I’ve known people in the game industry who have backgrounds in ethnomusicology, physics, history, and of course, geography. The common denominator is that we love games, and we have since we were kids.” 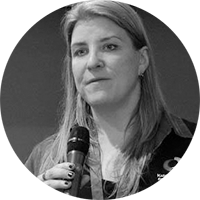 Edwards, who received her degree in Geography, seems an unlikely candidate to lead the game industry’s largest professional group based solely on her educational focus. When one finds out that she worked at Microsoft in the early days of Encarta Encyclopedia and World Atlas, it starts to make sense. Her education in geopolitics and cultures led her to think about how companies deploy content, colors, gestures, and iconography to an international audience. She created an internal team at Microsoft to manage these complex issues across the entire company.

“All these things have a cultural and geopolitical dimension to them,” she says. “I ended up working on almost every Microsoft PC and Xbox game to help ensure the content didn’t go out into the world with something particularly problematic.”

The Changing Hardware and Demographics of Games

Her time working at Microsoft led her to the IGDA. During her tenure at the organization, Edwards saw the industry change dramatically. She recalls how much impressions have changed about who gamers are. 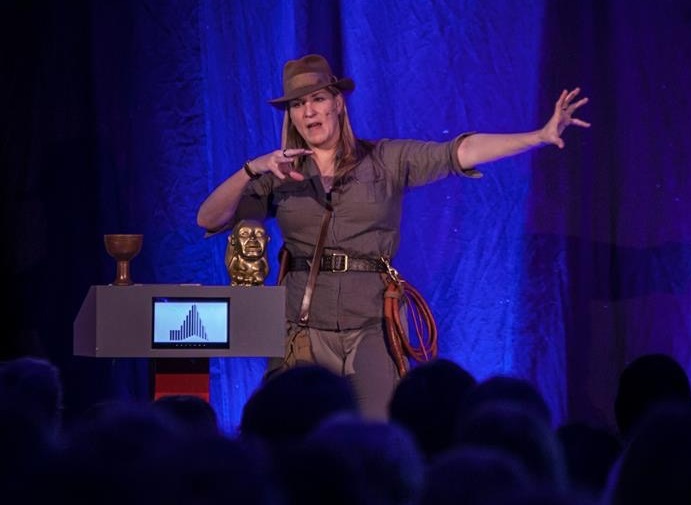 Kate Edwards at Konsoll 2015, where she spoke about strategies for game culturalization.

“The perception is that the average gamer is a 15-year-old boy playing games in his mom’s basement, but the reality is that there are more 30- and 40- something women playing games than teen males playing them.”

The shift wasn’t in demographics alone. Smartphone adoption expanded the game market and brought new business models and game design principles to the industry during her time at the IGDA. She sees a similar transformation and expansion ahead for virtual and augmented reality.

“The way we design games for VR is quite a bit different from a normal 2D screen, and I think that’s what game designers are struggling with right now. They’re figuring out what it means to have a VR experience. What makes it different. Game designers have to figure out what to do with VR’s immersive capabilities.”

Edwards is optimistic about the applications for VR beyond gaming, as well. She says haptic gloves, like those from HaptX, will be the bridge to make VR useful for an audience beyond gamers.

“We as human beings want to understand what our environment is about, so if we’re going to be putting people into high-fidelity virtual environments, we need to allow them to feel and interact in a way that’s high fidelity.”

She says HaptX’s technology is going to be a huge step forward in the evolution of such experiences, especially for VR applications that leverage data visualization. Urban planning, economic modeling, and architecture are areas she believes will benefit from VR visualization.

“It helps you understand data in a more intuitive way,” she says. “The more we can access the human senses for processing information, the more meaningful the information becomes.”

Edwards says that’s why sophisticated haptics are the missing piece of the experience. The eyes can only process so much information. Medical, climatological, and military visualizations, for example, sometimes struggle to convey the massive amounts of data associated with models.

“Touch is such an innate sense for human beings that it could really help people understand what’s going on.”

Haptic gloves like those appearing in Ready Player One still might be a few years away, but Edwards believes HaptX has made great progress toward developing realistic haptics.

“It’s not just a matter of building the hardware to bring haptic experiences to games. It’s going to take a leap in game design. It’s a dimension game designers don’t think about right now, but it’s exciting because it’s another evolution of the art form.”

Edwards says haptic gloves like HaptX’s product will come to consumer gaming, but it’s going to have enterprise applications first, which is where the company is currently focusing its efforts.

Growing the VR and Game Industry

As Edwards moves to the next chapter of her career after the IGDA, she reflects on just how much the industry has changed. During her tenure at the IGDA, she faced the toxic Gamergate movement, but she also saw continued maturation of the game industry. Now, professionals from the game industry, such as Unity and Unreal developers, environmental artists, and 3D modelers are seeing demands for their skills beyond games.

“My heart is so planted in the game industry that I truly want to see the developers succeed. I feel like I helped give the industry and especially developers a voice. We had to embody the change we wanted to see and be ready to take the risks.”

When Edwards looks back now, she thinks those risks paid off. The industry is in a better place, and she has moved on to finding new ways to advocate for change, including her recent appointment as Executive Director of Take This.

“My heart is so planted in the game industry that I truly want to see the developers succeed. I feel like I helped give the industry and especially developers a voice. We had to embody the change we wanted to see and be ready to take the risks.”

Take This is a non-profit focused on mental health for game creators and game players. The organization exists to educate the industry about mental health, help eliminate the stigma around discussing and dealing with these complex issues, and provide resources to the community, such as their “AFK Room” safe space program at many industry events.

Despite the challenges ahead, she remains optimistic about the future—both for the game industry and for its cousin: the emerging business of virtual reality and haptics.

We’re looking for companies and individuals to feature on the blog. Reach out to us on Twitter, Facebook, or at media@haptx.com.