Remember the N64 Rumble Pak? When I was younger, I never tired of the mysterious vibrations emanating from my controller while I navigated through obstacle fields in Starfox 64. Then I got a Playstation with a DualShock controller. And then an Xbox with, well, a controller. By then, the novelty had worn off. Vibration was so 1990s. 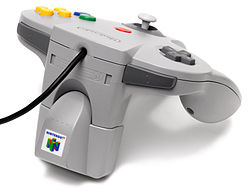 Yet two decades later, haptic feedback in games is fundamentally unchanged. The technology has gotten smaller, but the source of vibration is still an off-balance motor.

With HaptX’s platform, we’ve recognized that haptics is so much more than vibration. We imagine a future in which digital experiences are indistinguishable from real life, enabled by a full-body haptics suit like those popularized in Ernest Cline’s Ready Player One. That future is still a few years away, but we’re building HaptX to scale. That’s why when I watched the game trailers at E3 this year, I couldn’t stop fantasizing about a future of haptics-driven gaming.

When visitors to our website see our renders for the HaptX platform, the first reaction from Assassin’s Creed fans is, “You’re building the Animus!” We’re unlikely to enable users to visit history through their genetic ancestry anytime soon, but we appreciate the comparison. In Assassin’s Creed, a character in the present is connected to a device, the animus, which is so immersive that he or she experiences a full array of haptic and audiovisual sensations, essentially transporting that character to the past. At E3 this year, publisher Ubisoft debuted footage of the latest game in the franchise, Assassin’s Creed: Origins, which takes place in ancient Egypt.

Why It Needs Haptics: The Assassin’s Creed franchise is a game about jumping between building, sneaking down alleys, and diving off precipices, all of which are amazing opportunities for realistic haptics. Imagine climbing the pyramids and feeling the limestone under your fingers or sneaking through the grass and feeling each blade across your body. Games in the Assassin’s Creed franchise have a third-person perspective, making them unconducive to VR in the immediate future. Still, Assassin’s Creed ranks on our list of games most in need of haptics (and VR).

At E3 this year, Bethesda announced the arrival of Skyrim VR in November 2017. This announcement wasn’t surprising given Bethesda’s investment porting Fallout 4 and Doom to virtual reality, but it represents another milestone toward bringing long-form games to the medium. Unlike most AAA roleplaying games, the Elder Scrolls franchise has a first person perspective, making it well-suited for virtual reality. Plus, the game’s interface is simple compared to other roleplaying games.

Why It Needs Haptics: In Skyrim, you use your hands to interface with the virtual world, just like in real world. You cast spells and wield weapons using your virtual hands. Imagine the thermal feedback of your hand wrapped around the cold, metal hilt of a weapon or your arm sheathed behind a shield. Critics lauded the original Skyrim as one of the most beautiful games ever produced due to the magnitude and detail of the environment. With the game coming to VR, the possibility of interacting with that environment in a realistic way is tantalizing.

An exclusive for Xbox One and Windows 10, Forza 7 is the latest in Microsoft’s long-running racing series. The franchise has represented the gold standard in racing games for years, and it made news this year with the announcement of its ability to run at 4k and 60 frames per second on the new Xbox One X. Discussion of VR was notably absent from Microsoft’s keynote, but it doesn’t keep us from imagining what it might be like to experience this game in virtual reality.

Why It Needs Haptics: Full-body racing simulators have long been the province of arcades. After all, few people want to dedicate a space in their home to a giant car seat. With VR support, racing games are achieving new levels of immersion, and we hope to see haptic platforms like HaptX supporting these experiences in location-based entertainment venues—and ultimately at home, as well. Feeling the vibration of the steering wheel, the resistance of the pedal, and the pull of the road as you try to steer around obstacles and turns—these traditionally required huge pieces of equipment. Now, we’re looking at a future where playing Forza feels virtually like being a NASCAR driver racing across the world’s most amazing roadways at a fraction of the price of a Lamborghini.

Shadow of the Colossus

Shadow of the Colossus released on Playstation 2 in 2005 and was a critical success for its clever form of puzzle solving. It challenges gamers to find the weakness in enormous colossi scattered across the land. At E3 this year, Sony announced a rerelease of the game in high definition for Playstation 4, pleasing many of the game’s diehard fans.

Why It Needs Haptics: In Shadow of the Colossus, you’re called upon to scale monolithic creatures while they flail about. With haptic feedback, you could feel the tactile sensation of the fur and rough stone façade of the beasts. Your fingers could struggle against the force of the creature’s movement, and you could sense the vibration of each thundering step. We hope that Sony, with its investment in virtual reality, might realize the potential of this game genre in future PSVR support.

Even if you’ve never played Doom, you’ve probably heard of it. The game made waves in the ’90s for its fast-paced, ultra-violent, blood-splattering aesthetic. After several mediocre sequels, Doom returned in 2016 with its signature style, now rendered in high definition. Critics lauded it as a return to form. Among the game’s original designers is John Carmack, who, in addition to designing many classic games, co-founded a little company called Oculus. I’d argue that Bethesda’s new Doom VFR is really a fulfillment of a promise from Doom’s inception. The game was always meant to exist in VR; we just had to wait 25 years. 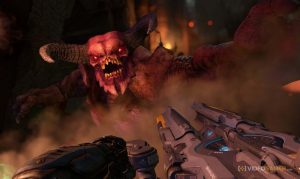 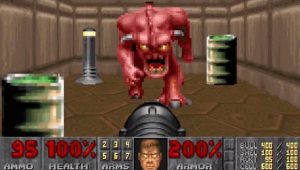 Why It Needs Haptics: Doom is a game about wielding huge, impractical weapons and getting sprayed with demon guts. And although that’s not a selling point for everyone, the haptic applications are compelling. Using a game controller as an interface to a first-person perspective shooter is a bit like playing tennis with a baseball bat. It’ll work, and you might still hit things, but the experience is vastly inferior. Feeling the force of the shotgun’s recoil, the heat of chain gun, and, of course, the vibration of the ever-popular chainsaw, could dial Doom to 11.

With Sony recently reporting a million PSVR headsets sold, demand for VR games is only likely to grow, and with it, the need for interfaces with realistic haptics. With Skyrim, Doom VFR, and Fallout 4 coming to VR, Bethesda certainly believes VR will play a big part in the future of gaming.

Our team at HaptX is partnering with leading entertainment companies to bring immersive HaptX experiences to gaming and beyond. Do you have a killer idea for an entertainment offering that needs haptics? We’d love to hear your thoughts. Reach out to us on Twitter or Facebook .