At HaptX, our team is celebrating a momentous 2017. We closed the year with a bang, retiring the AxonVR moniker in November and adopting a new name: HaptX. With this change came the reveal of our new product, HaptX Gloves, a set of haptic gloves capable of producing realistic touch feedback.

Sometimes the best measure of success is the quality of people a company attracts and maintains. In 2017, we added 13 full-time employees, growing our team by over 50 percent. We hired specialists and diversified our technical team, which includes software engineers, mechanical engineers, biomedical engineers, and manufacturing engineers. We also rounded out the company with new talent on our administration, finance, HR, and marketing teams.

Another measure of success is the quality of the company you keep. We traveled over 100,000 miles with the HaptX haptic gloves in 2017, building relationships with innovators across industries. We shared our technology with leading automakers, aerospace manufacturers, defense contractors, design and architecture firms, retail giants, and entertainment companies. They’re all excited to put our haptic gloves to work.

Finally, we’d be remiss if we didn’t mention a few notable honors, including an essential VR rite of passage: appearing in Kent Bye’s Voices of VR Podcast. We also claimed the Technology Category at the Central Coast Innovation Awards and were recognized in the Seattle 10 by GeekWire.

Our company’s success is possible because of the strides of the VR industry. Although this year wasn’t the breakout year that some VR enthusiasts hoped for, 2017 proved VR has resilience. Consumer adoption remains steady with Sony announcing it had sold over 2 million PSVR headsets and Samsung breaking 5 million on Gear VRs. B2B and enterprise VR continued to gain traction in 2017. In fact, analysts project that revenues from enterprise VR will outpace consumer entertainment revenues by 2020.

Thanks to great work from the community—from technology giants to indie developers—more people and companies than ever before are using VR, AR, and haptics.

HTC made a splash at CES, where they unveiled the Vive Tracker. This compact device attaches to objects, enabling creators to go beyond controllers and track virtual objects. We used Vive Trackers at HaptX in developing prototype versions of our HaptX’s haptic gloves.

Facebook launched Spaces, a social app allowing users to hangout in VR. At the Oculus Connect conference in October, Mark Zuckerberg announced, “We want to get a billion people in virtual reality.”

Microsoft launched Windows Mixed Reality along with a lineup of third-party VR headsets from companies like Acer and Samsung. The VR community had a scare when AltspaceVR announced it was shutting down, but Microsoft resuscitated the popular social VR startup by acquiring it in October.

Even Apple joined the VR ecosystem with its launch of the iMac Pro, its first Mac to support virtual reality content and development.

This year was a turning point for augmented reality. We saw the release of Apple’s ARKit in June and Google’s ARCore in August. Major retailers also started adopting mobile AR. IKEA launched Place on the app store, allowing users to preview furniture in their living space (no hexagonal screw driver required). Amazon added an amazing AR function into its iOS app letting customers search for and preview products using a phone’s camera. And slipping in just at the end of the year, Magic Leap previewed its 2018 release of its Creator Edition. 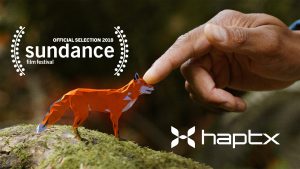 HaptX is hitting the ground running with two big events in January.

First, we’re heading to Las Vegas for CES. We had an amazing experience at the conference last year. Here’s what IEEE Spectrum had to say after experiencing our thermal demo:

“This is my tenth year at CES… maybe once per show, I get reminded of why I’m so lucky to be here doing what I do. Last night, [HaptX] reminded me that technology can be absolutely magical when a tiny virtual deer that took a warm and fluffy nap on my outstretched palm.”

A week later, we’re heading to the 2018 Sundance Film Festival, where we’re an official selection. Sundance is the world premiere of two of our VR experiences and the first time the public will have a chance to try a HaptX Glove. The HaptX Glove is the first VR hardware to debut at Sundance since 2012, when the world first glimpsed an Oculus Rift prototype. We’d say we’re in good company.

We hope you join our journey.

Sign up to receive emails containing articles, interviews, and news from HaptX. You can unsubscribe at any time by emailing support@haptx.com or clicking unsubscribe in the email.
GET OUR NEWSLETTER
By Andrew Mitrak|2018-01-04T16:17:12-08:00January 3rd, 2018|Culture|